I love potatoes, they are particularly good with fish and my special love (apart from my wife) marinated herring, where the ridiculously good garlic herring is my absolute favorite (the only problem with that is that they only sell it in ridiculously small jars, but I will soon try to make my own, which will correlate well with my planned roasted garlic aioli experiments).

When I was a kid, my parents had a “root cellar” under the house, where they stored many things. They used to buy potatoes in 50 Kg sacks, and there was never a problem with growth during storage.

Since then I have had a problem to store potatoes as I’ve never had access to a root cellar after that. Thus, only been able to buy very small quantities of potatoes, so they won’t start growing when stored.

However, a friend said that you just need to dig a sufficient deep hole in the ground, and then I remembered about the calculations our physics teacher at the university had made on root cellars. When they are sufficiently deep, there will become a phase lag of the heat conduction between the summer heating and the winter cooling that evens out depending of the deep and the slow heat conduction, so the cellar will keep an almost constant temperature around the year. However, I couldn’t find such a brief and elegant solution which our physics teacher provided, but I found , this paper: “Exponential sinusoidal model for predicting temperature inside underground wine cellars from a Spanish region“, which deals with mathematical modelling to predict the year around temperature in a wine cellar.  For those who are more interested in a practical approach, I found this: “Root Cellars 101 – Root Cellar Design, Use and Mistakes to Avoid“.

Anyway, even if I have the ability to make the calculations needed  it also needs some effort to build such a cellar, and as I’m into technology and a geek, as well as a researcher and have a plethora of other high priority projects, I tried to find what the actual optimal conditions for storing potatoes are. I finally found the very simple criterions:

OK, as we actually have a fridge earlier used for commercial sale, which has several levels, I purchased a combined hygrometer/thermometer which I placed at different levels of the fridge.
I concluded that the upper level is excellent for storing things like Crémant and Champagne, and also concluded that the moisture range for the bottom level made the meter to overflow (outside measurable range), but the second level was just perfect for potatoes❣
OK, when I just took this picture it was as high as 7.6℃ but this is rare, it is usually between 4-6℃, here with a moisture level of 71%, but often at like 84%. 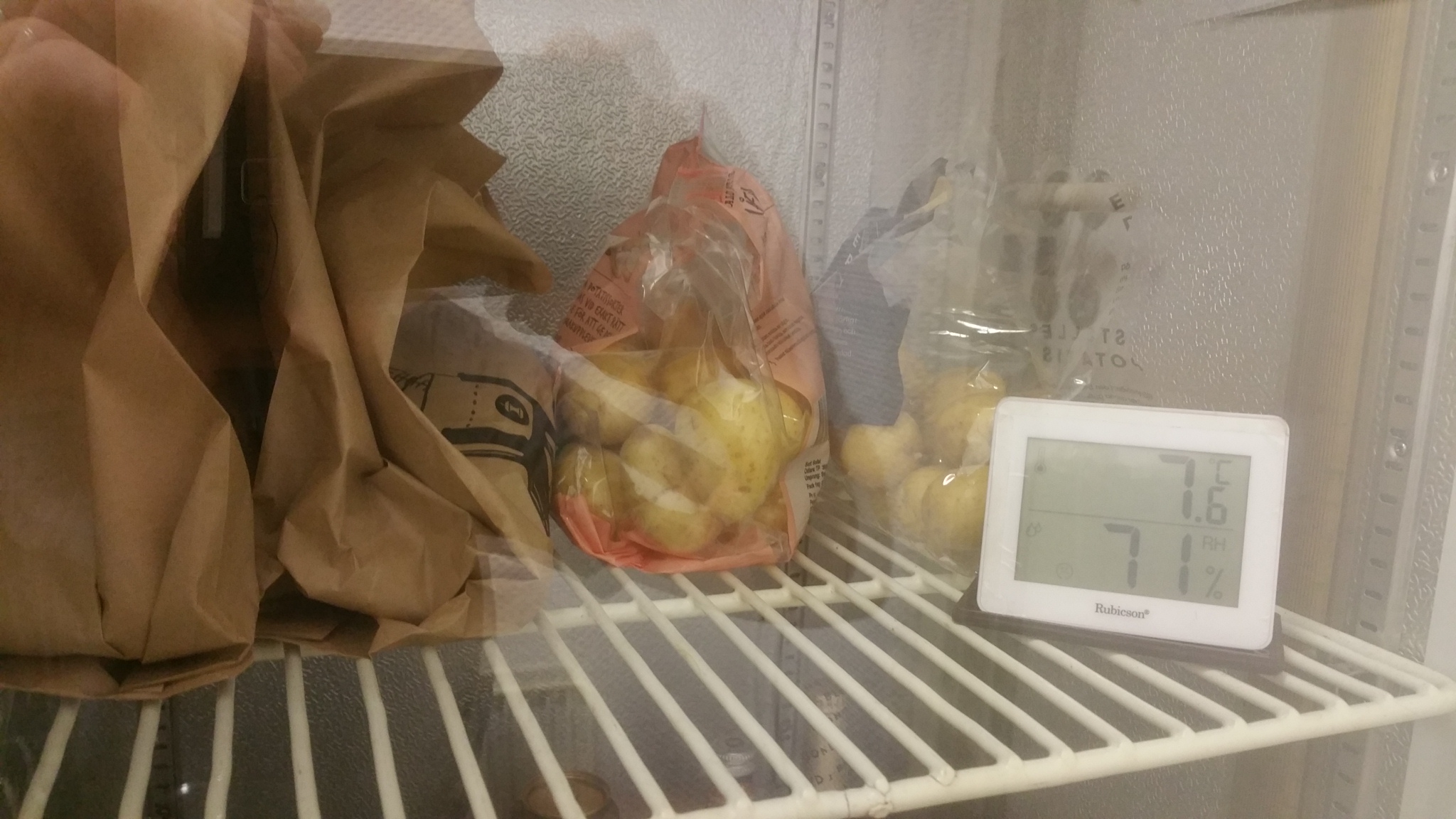 One fundamental issue is whether our minds are computed by the recurrent neural network engine constituting our brains, or elsewhere.
My view: It depends upon whether the fundamental consciousness has ever solved the problem of consciousness.
Otherwise our bodies may just be VR interfaces to a gigantic mind, having (likely self induced) severe dissociative identity disorder.
As I’ve been teaching in networking, I find this illustration of WAN/LAN to be a potentially good metaphor, but in the reverse.

An illustration of the LAN-Firewall/NAT-WAN concept.

In the LAN/WAN case, the WAN can not see into the LAN, due to the firewall, but the LAN can see everything on the WAN.

Update: Their support called me at 4PM and said that they had replaced the fiber port at the gateway, and since I came home half an hour ago I can confirm that it works, I’m happy ❣

When we installed fiber network 100/100 in 2011 we chose a local ISP Teknikbyrån. Their support was excellent. The first support message I wrote 1:31 PM Oct 23 2011 (our three fix IP addresses were not working, only DHCP), then I got a reply from their support 2:05 PM, and they had fixed the problem. That is, 26 minutes for fix and reply, that is great!

We have now been without network since 9PM on Saturday evening Aug 15 2020, that is 64.5 hours… but we were saved by my Telia mobile broadband which I’ve shared to four of my wife’s work computers (she is working from home, since April 1st, due to Corona) and two of mine, and I’ve shut down a few computers to save power, as long as we are without network. I need to move some, to a more reliable network.

Unfortunately this company Teknikbyrån was purchased by a big ISP provider IP-only in 2015, and we had some problems in June 11 after a power failure in Åkersberga (our small city). Mail to support at Sunday Aug 16 2020, with auto reply and errand number (in Swedish) (pdf in Swedish, may soon provide an English translation). If I had been the main share holder of Teknikbyrån, I would have opposed such a sale.

I never got an answer on the support mail, only an errand number… I called their phone support, where I got to talk with someone who hardly even knew what a NAT was. It took around one hour before he had been able to provide the question to for me provide me a trivial answer.
He wanted to know the MAC address for a computer connected.
Why didn’t he ask that from the beginning, it could have saved us both a lot of frustration and shouting?
OK, they got the network working within a few hours (likely just by restarting the gateway computer).

After the last power failure on Saturday 9PM, the network was down. I wrote to their support on Sunday at 2:33PM, with an analysis where I conclude that there is likely some connection problem between their gateway computer and the fiber modem.
Six minutes later, I got an automatic reply, given an errand number 917522. This time in Aug 2020, I still haven’t got an answer, and the network is still down, despite I was promised by their support that a technician will be on site and fix the problem at 8AM this morning…
Maybe they have problems with personnel, they no longer have not even a technician as jour in Åkersberga, the closest office is now in Uppsala, around 60 km from here.

As I’m now retiring, maybe I should offer myself as a jour technician to keep the network running in this city Åkersberga. Alternatively we have to find another more reliable provider.

Another alternative is to start developing the ISP independent wireless network  I wrote about in a school report from 1987 where I describe wireless pen computers and ISP independent networks. (in Swedish (I have an English translation as well, will soon provide).

To be offline in a digital world is frustrating…