We have passed the Apocalypse..❣
What is now waiting for all is a future in Peace❣

We will soon open up our portal, at your service, for a sane and healthy development of mankind in peace and harmony.

These reindeers are our Wish-IT® Mascot❣ 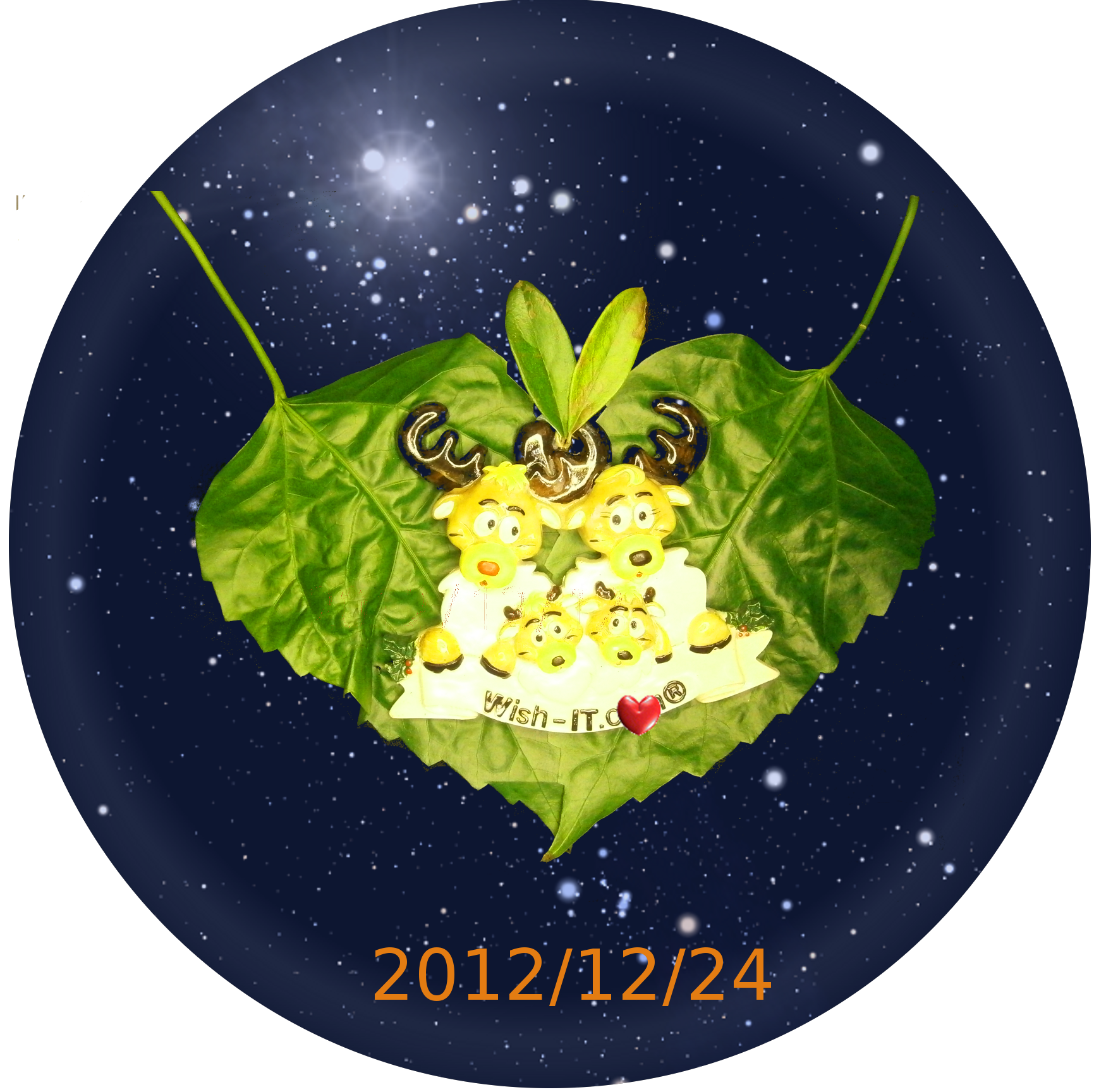 Wish-IT® soon at your service❣

There is one tune which is my all time favorite, Imagine by John Lennon❣
Then, for anyone who hasn’t seen this fantastic speech Charlie Chaplin’s final speech in The Great Dictator, then it’s high time. I consider it to be the best speech ever made❣

No, by definition utopia is not something you can reach.

This was the reason why I got the proposal to use nonutopia
when definining the domains nonutopia.org , nonutopia.net and nonutopia.com in 2002.

That is, the Utiopia we are aiming for is a Non Utopia, as we will be able to reach it❣

The only usage so far for these domains have been a few statements given about the future in 2004, and our patent on open innovation, which will be one of the keys to the propespering future.

Another usage has been to make a backup of President Obama’s promises, just after the election 2008, not yet fulfilled… which are on nonutopia.net, and it will stay so as we won’t use .net domains either apart from net administrations, like name servers.

We will use the domain wish-it.com to start with as in our mascot, as well as wish-it.org as generic domains but later we also promote local local top level domains due to specific local needs, e.g. wish-it.se, wish-it.us, wish-it.eu, wish-it.asia, etc. Over time we aim for top level domain free adressing as well as a more robust routing protocol than is currently implemented in the TCP/IP protocol.

So, you are still asleep…

The Apocalypse obviously did not happen in the way many may have expected, many will claim that it didn’t happen at all, but… if you really start looking around, if you look upon the world with new eyes, maybe you will notice that something has happened, something wonderful, something that will soon make this world a better place.

It is clear that businesses which currently take place at many places over the world are not always for the best of the humanity and its development. The so called “profit thinking” which is short sighted and non productive, as its main goal is to make “profit” is a type of business which need to disappear or change its focus.

We need to promote the good forces in the society, we need to encouragre those who create and produce due to passion and love, those who care about what they produce and who care about the consumers. We need to encourage those who use ecological/biological producation simply because this is a more robust and well tested technology. For my own I do not oppose e.g. GMO in principle, but GMO is most often associated with harmful, monopolising, lock-in business models, where huge companies (like Monsanto) are trying to monopolise the market with patents and other types of lock ins. For a healthy development we need to promote what we know is healthy, and organic production clearly is.

To all optimists in the world, make your voice heard, you are needed❣

To all pessimists in the world, start listening, listen to the optimists, things will improve❣

To all developers of long distance weapons, quit your job ASAP❣

To all pilots of killer drones, quit your job ASAP, this will make you sleep better at nights❣

As all of you probably know, apocalypse just means awakening…

I haven’t seen anything yet that I’m sure about being an “UFO”, well I have seen UFOs (Unidentified Flying Objects) but I can not tell that they were what people often mean by UFO that is merely ETFO (Extra Terrestrial Flying Object). Those UFOs I have seen, which I have suceeded to take some photos of, but of quite low quality, hardly interesting for anyone can certainly be explained in other ways.

In one case I noticed that a few objects, looking like planets were moving versus the background stars. However, in the photos I took, I see that it was actually the opposite, these objects I had seen wasn’t moving at all, it was all the stars in the background which were moving, that is, these objects were stationary, and compensated for the turn of the Earth. Now, someone may claim those are just geostationary satelites, but geostationary satellites (like all GPS satellites) actually move as well, apart from one specific kind placed exactly over the equator.

However, having read about and listened to many people who have seen or experienced things related to seemingly extra terrestrial activity, it would be wonderful to see all such reports to be jointly analyzed for common denominators. Often UFO reports are handled the completely opposite way… that is, people try with all kinds of means to explain observed phenomenon with “natural” explanations. This is not a very scientific way to deal with such data…

This is a mistake I see over and over, everywhere. It’s only by meta analysis (using e.g. different data mining techniques) it is possible to a make a better judgement of the observation, otherwise it becomes non productive pseudo science.

For everyone who has seen Star Trek: First Contact or having read Carl Sagan’s novel Contact or seen the movie Contact, based upon that novel, knows what I’m wishing for.

I find it very likely that there are other species out there, species that have become civilized, been able to reach the stage of technology needed for space travel, who altruistically search space for other species in critical stages, species needing help to overcome the birth problems.

Humanity is experiencing such a crisis now, and some people consider that the humanity will fail, become extinct because of its lack of civilization and love. Other believe that humanity will manage with the crises and become a master of technology, freedom and peace and conquer space. I belong to the latter group, but wouldn’t mind seeing some help coming from above.

Then there is a group of people who see space as a resource, with almost infinite amounts of metals, minerals and energy. I feel somewhat sick about this kind of thinking, as humanity has not yet learned to become civilized, there are still humans fighting on this planet, there are humans robbing other humans of their resources, there are humans wasting our resources in an insane way. I really hope this group of people will never reach space, as they may not be able to handle it. They may rob or fight other species out there, to steal there resources. Then I would feel very very ashamed of being human 🙁